PROJECT DESIGN IN ACCORDANCE WITH 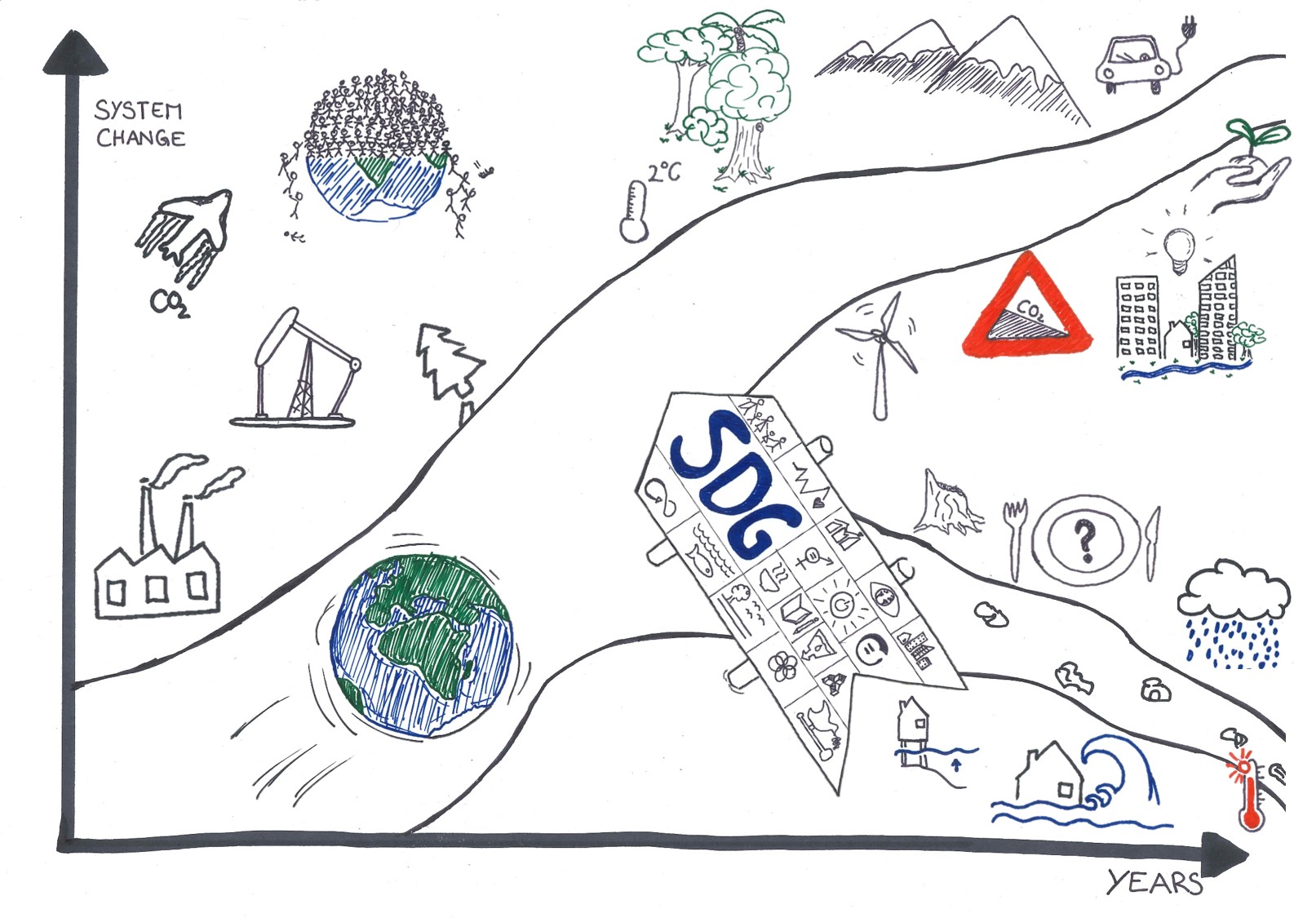 Implementation of principles in Division 4D

Division 4D sees transformative change as a process of shaping societies that make sustainable use of natural resources and energy, protect the climate and ecosystems and are well-equipped to handle change. The energy and transport revolution and the agricultural revolution are current examples of transformation processes that relate to many of the Sustainable Development Goals at the same time. The five principles for implementation of the 2030 Agenda show how transformative change can be supported. In the examples below, we show how the principles are reflected in the projects designed under the remit of Division 4D. We also present relevant tools and concepts.

The integrated approach principle means that all three dimensions of sustainability – environmental, economic and social – are taken into consideration in a balanced manner. This makes it possible to harness synergies. At the same time, conflicting objectives (trade-offs) must be identified and discussed.

Division 4D has long placed emphasis on integrated approaches and can draw on many concepts that are already in place that address the topics it deals with. Implementation often takes place across sectors and divisions via established joint structures. Nevertheless, we should always ask ourselves whether we give adequate consideration to all three dimensions of sustainability when designing our projects. Do all resource conservation and climate change projects focus sufficiently on social aspects? Are they perhaps contrary to the economic development goals of the countries or do they promote them? Do agricultural promotion projects, say, take environmental aspects sufficiently into account, and do they promote gender equality and the rights of traditional user groups? For GIZ, there is a fourth dimension of sustainability: that of political participation, with the question of how viable the institutions we support really are.

A completely integrated approach (as far as this actually exists) would obviate the frequently reiterated need to mainstream 4D’s topics, since the fourth dimension of sustainability would already be completely covered. To come closer to abandoning a sectoral silo mentality, therefore, our projects should reflect this multitude of perspectives as closely as possible and also strengthen the institutional foundations in the course of implementation.

Publication on the integrated approach related to 4D topics:

Leave no one behind (LNOB)

The LNOB principle focuses on disadvantaged individuals and population groups such as women, children, young people, persons with disabilities, indigenous population groups and refugees, as well as the poorest of the poor. The aim is that the goals of the 2030 Agenda should be reached first for those who have so far been left the furthest behind. (New) projects should examine the extent to which these groups can be included.

In Division 4D, this varies depending on the theme being addressed: climate change adaptation measures, for instance, identify the most vulnerable sections of the population who are hardest hit by the impacts of climate change, in order to strengthen their resilience. Ecosystem degradation affects the poorest population groups who are the most dependent on natural resources and the services of intact ecosystems (see The Economics of Ecosystems and Biodiversity: ‘GDP of the Poor’). In rural regions, access to basic services and employment is also restricted. Poverty is increasing massively in cities too. In the poorest region, sub-Saharan Africa, the urban population is set to grow fourfold to over 1.3 billion people by 2050. Owing to the high population density, the risks related to security, health and the environment are particularly high.

The LNOB principle is implemented at different levels within project work and sectoral structures/partner systems. In the field of water, sanitation & hygiene (WASH), for example, this is done via:

However, when projects are being designed, thought must also be given to whether greater leverage could be achieved by addressing other target groups. This applies, for example, to projects designed to protect global goods (reduction in greenhouse gases, conservation of biodiversity), but also those that promote innovations in agriculture or the energy sector. In many cases there is a need to focus on target groups that can be reached simply and effectively, and where the sustainability of the chosen approaches can be guaranteed. This orientation often excludes the poorest of the poor and those most disadvantaged. However, in line with the ‘safeguards’, care should be taken not to exert a negative influence on these groups. This by no means reduces the quality of a project: in most cases, marginalised groups benefit at least indirectly. If a conscious decision is made to benefit a socially and economically stronger target group, this should be correspondingly justified in the project proposal.

Examples of approaches and projects: 

Transformation is most successful when it is based on a broad consensus, and when this is in turn fuelled by shared responsibility. Shared responsibility for implementation of the 2030 Agenda means that not only policy-makers and states but also the private sector and civil society are responsible for achieving the SDGs. Governments, civil society, the private sector and bilateral and multilateral donors are called on equally within a multi-stakeholder approach and are involved at the relevant intervention level (global, regional, national, local). More effective cooperation between these actors is also meant to help mobilise knowledge, expertise, technologies and funding.

Multi-stakeholder partnerships are nothing new to Division 4D. Global and national initiatives and partnerships between various actors, e.g. in climate finance and pertaining to sustainable consumption and certification, help to foster a sense of shared responsibility. That said, projects should avoid letting themselves be used deceptively as a showcase for unsustainable practices (greenwashing or social washing). Whether a partnership is more useful than harmful overall in the long term may be difficult to judge in individual cases, but this should be continuously examined in a joint and transparent process.

When applying the accountability principle, the aim is on the one hand to support partner countries in their national reporting in the High-Level Political Forum, and on the other to report on GIZ’s contribution towards implementation of the 2030 Agenda as a supporter of the respective partner country or countries. In many cases, these are still engaged in breaking the SDGs down into national policies and strategies. Hence there are very few projects as yet that are already making a direct contribution to national reporting. Questions that remain to be answered with regard to project and programme planning are: can the data collected by our programmes and individual projects contribute to national reporting on the SDGs? How closely should our indicators be aligned with the national indicators? How can projects support the collection, analysis and dissemination of data? Do the data collection methods need to be harmonised?

Most DC projects are confronted with complex issues and an uncertain data situation as well as a plethora of moral values. The clearer we are about the uncertainty of available knowledge and the myriad of values that exist, the more we will be able to write credible reports that meet with broad societal acceptance.

The United Nations held its first ocean conference in 2017 to promote shared responsibility for SDG 14: Life below water, and to strengthen follow-up and review processes. The conference is to be held every three years from now on. A pertinent database has been set up that contains more than 1,400 voluntary commitments by various governmental and non-governmental actors, (e.g. BMZ’s # Ocean Action 16102 on the Ten-point Plan of Action for Marine Conservation and Sustainable Fisheries).

Publications and guidance on accountability related to 4D topics:

The 2030 Agenda aims to apply to all of the world’s nations – developing countries, emerging economies and industrialised countries. This is one of the features that distinguishes it from the former MDGs. All countries therefore bear responsibility for taking implementation measures. At the same time, the countries retain their sovereignty when it comes to deciding which SDGs will be given priority and how they will be achieved.

The accusation that global agendas are largely determined by industrialised countries or are dominated by science, technology, influence, etc., is one of the most common forms of criticism levelled at development cooperation. The narrative of a ‘transfer of knowledge and technology,’ ‘best practices’ or ‘scaling up’ still suggests that ready-made solutions can be simply transferred and applied to complex problems – often at the expense of local legitimacy, relevance, credibility, implementability and thus also sustainability.

Wherever possible, projects should help to walk this fine line between global validity and national contextualisation, while keeping an eye on global justice considerations.

The themes of sustainable production and consumption offer an opportunity to raise global justice issues as well as the environmental footprint or the concept of Earth’s environmental limits. International environmental agreements such as the Paris Agreement on Climate Change or the Nagoya Protocol place an obligation on industrialised and developing countries alike and aim to achieve a transfer of knowledge and technology and to mobilise resources among them on an equal footing.