PROJECT DESIGN IN ACCORDANCE WITH

The key to transformative implementation

Leave No One Behind

Leave no one behind! This demand is an overarching principle that runs through the entire 2030 Agenda and applies equally to particularly low-income and/or fragile countries affected by violence and conflict, and to marginalised people. The basic assumption is that sustainable development can only be achieved if no one is left behind. The goals and targets of the 2030 Agenda must be met for all sections of society – and first and foremost for those groups who have hitherto been ‘left farthest behind’. Not enough has been done to implement LNOB so far. Some people are pushed back even further. LNOB is popular internationally but is seldom reflected in concrete implementation strategies.

GIZ would like to comply with the principle by placing a stronger focus on especially poor and disadvantaged groups in all sector programmes. To implement the leave no one behind (LNOB) principle, we apply concepts and strategies such as the cross-sectoral poverty reduction strategy, the human rights approach, approaches to promote gender equality, approaches to promote constructive relationships between the state and society, the development for peace and security strategy and the good governance strategy.

The holistic LNOB principle also offers the opportunity to address multiple discrimination within especially poor and disadvantaged groups, such as single mothers with a low level of education. GIZ therefore considers the identification of especially poor and disadvantaged people and groups, and particularly of people who are subject to multiple discrimination, as a key prerequisite for realising the principle, for instance using context-specific target group analyses and collecting disaggregated data and indicators. Inequalities and a lack of participation are often a hotbed of social tensions and violent conflict.

Implementing LNOB means addressing structural causes of disadvantage and discrimination. This also includes promoting the effective participation of vulnerable people and groups in the planning, implementation and evaluation of programmes.

In order to implement the LNOB principle, we can leverage the following three interrelated approaches:

1.  Targeted promotion: eliminating discrimination and supporting empowerment: The most disadvantaged people and groups will be specifically addressed and assisted in articulating their concerns freely and effectively in the political arena and in participating in political and economic processes. To do so, we need to understand and counteract the causes and patterns of discrimination in the specific context.

2. Comprehensive approach in all sectors: realisation of universal human rights for all population groups: Inequality and discrimination will be comprehensively and continuously addressed in all programmes and sectors, for example by dismantling barriers to access, promoting equal opportunities, advising on sectoral reforms and making policy impact assessments that take into consideration the impacts on disadvantaged people and groups and make it possible to orient strategies accordingly.

3. Creating a conducive environment: Parallel to this, a conducive environment must be created to support the levers mentioned above. At national level, this includes questioning obstructive social values and norms, promoting civil-society participation in social negotiation processes and strengthening effective, transparent and accountable institutions. At international level, it entails promoting coherent policies, particularly in the areas of trade, debt, international taxation policy, illicit financial flows, migration and technology transfer.

The current discussion process within GIZ is being conducted across divisions and departments, especially within the leave no one behind innovation forum. Go here for a document that explains GIZ’s understanding and implementation of LNOB.

The OECD Development Co-operation Report 2018: Joining Forces to Leave no one Behind currently sets the course of the international debate. 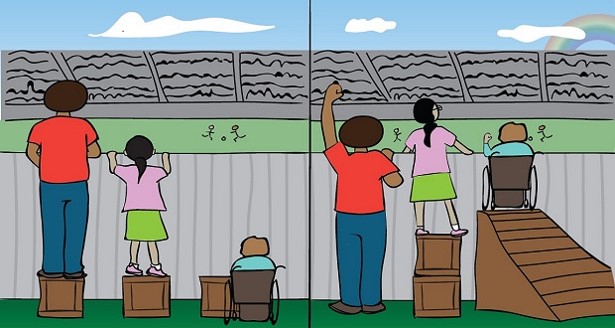 What has to be borne in mind? Key questions:
Helpful tools and approaches

Careful prior examination of the themes environment, climate change, human rights, conflict and context sensitivity and gender (GIZ Safeguards+Gender management system) paves the way for avoiding unintended, negative effects on poor and disadvantaged population groups when designing programmes and for practising context and conflict sensitivity (minimum standard: do no harm) (see links at working in fragile contexts). The management system goes further with regard to gender and always examines the existing potential for promoting the actual implementation of gender equality and the elimination of gender-based discrimination. Owing to their gender, women and girls are much more frequently the victims of multiple discrimination than male members of the same population group.

The BMZ guidelines on taking human rights standards and principles into account, including gender, when drawing up programme proposals (German) offer sector-specific assistance for examining the relevant human rights risks and impacts of DC projects and point to approaches that are suitable for strengthening disadvantaged groups. In BMZ business, all projects should make positive contributions to realising human rights over and beyond the minimum do-no-harm standard (to prevent unintended, negative effects).

For fragile countries or those affected by violence and conflict, assumptions should be made based on the integrated context and human rights analysis (German) both with regard to possibly disadvantaged target groups as well as to specific do-no-harm aspects that should be examined or adjusted during the appraisal mission. Horizontal inequalities and a lack of partial participation are often the fertile ground for tensions and possibly violent conflicts.

The ToRs of the appraisal missions should contain the following addenda:

If possible, target groups should be included in the formulation of the objective and indicators in disaggregated form. Otherwise, the module proposal should at least make clear how the data was obtained (especially in the ‘Objectives, target group, results hypotheses and indicators’ and ‘Problem and potential analysis’ sections). Breakdown according to gender and giving consideration to the different realities of women’s and men’s lives and their different needs and concerns is a mandatory condition stated in the BMZ guidelines and is a quality feature of our work.

The collection of disaggregated data may have an escalating effect by highlighting differences in polarised societies or for politically disadvantaged population groups and may endanger specific target groups. This should already be taken into account in the integrated context and human rights analysis (German) of the Safeguards+Gender management system.

For projects in which poor people or other marginalised groups are the direct target group, the Poverty Targeting Primer can offer guidance concerning the strengths and weaknesses of different targeting methods and provide help to identify a suitable targeting method for the individual project context.

The development of options in the brief assessment offers the first strategic possibility of showing which options are particularly suitable for strengthening the LNOB principle.

The Strengthening civil-society organisations in the Palestinian territories programme gives special support to people with disabilities and disabled people’s organisations. These are severely restricted in their political and social representation due to the lack of democracy. The efficiency of civil-society partner organisations to represent their interests is therefore promoted in order to give a voice to people with disabilities, including cognitive and psychic impairments, within societal discourse and to enhance their visibility. In this context, the implementation of the United Nations Convention on the Rights of Persons with Disabilities and the inclusion of people with disabilities in international cooperation programmes are being improved. The concerns of women and girls are actively promoted.

How is the principle put into practice:

The regional programme Qudra – Increasing the resilience of host communities in neighbouring countries during the Syrian refugee crisis aims to improve the general conditions for refugees and host communities by carrying out coherent measures on a regional scale that are designed to strengthen resilience.

Where does the programme link up with the principle:

What was done differently: